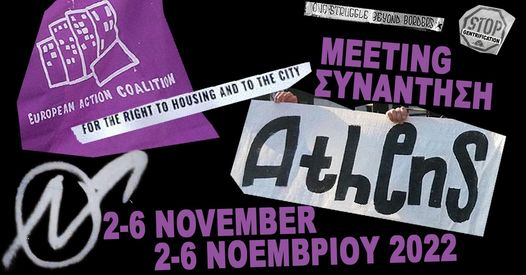 The European Action Coalition for the right to housing and to the city (EAC) is a network of 35 grassroot collectives and organisations active in more than 20 countries in Europe. Twice a year, the EAC members meet in a different European country. This time, the meeting will take place in Exarcheia, Athens.
The Athens’ meeting :
The main objectives of the Athens’ meeting are to strengthen the action of European groups through sharing knowledge and know-hows, to create alliances, to strengthen and develop transnational working groups, to plan common actions and/or campaigns, to organise the next Housing Action Day (day of common actions organised in several European cities for the right to housing and the right to the city), etc. Different tenants’ unions will be joining us (from London, Ireland, Manchester, Barcelona, Berlin, Paris, …), organised groups of homeless and solidarity people, anti-eviction groups, activists fighting against gentrification, or those building or defending alternative housing, etc. The topic of energy bills will be addressed.

SATURDAY 05/11 Various workshops and debates 10am – 8pm
Where : Polytechnio and various spaces in Tsamadou street